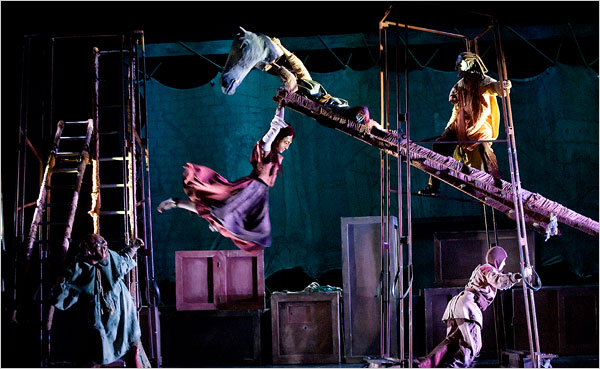 It’s the script that makes this production soar.

Just when the play is going along nicely, in steps Victor Hugo. Not only does he rudely interrupt this interpretation of his own novel, but he insists on adding his two bits. His intervention proves to be pure genius on the part of Redmoon Theater. The classic story of the disfigured bell ringer takes on a whole new dimension when the author is allowed to take part.

‘Hunchback” is unique in other ways as well. Actors in masks along with rod puppets perform on an open stage. Large see-saw ladder contraptions serve as bell towers allowing the actors to climb, swing and cavort high above the stage floor. A giant pop-up book and a row of telephone booth size boxes complete the unorthodox staging.

But it’s the script that makes this production soar. Quasimodo is not an object of pity but a flesh and blood creature that has been abused since childhood by the very church that offered him sanctuary. Yet despite these odds, his spirit endures and ultimately triumphs.

Jim Lasko and his ensemble have extracted the essence of the tragic tale and have fashioned a fresh interpretation.