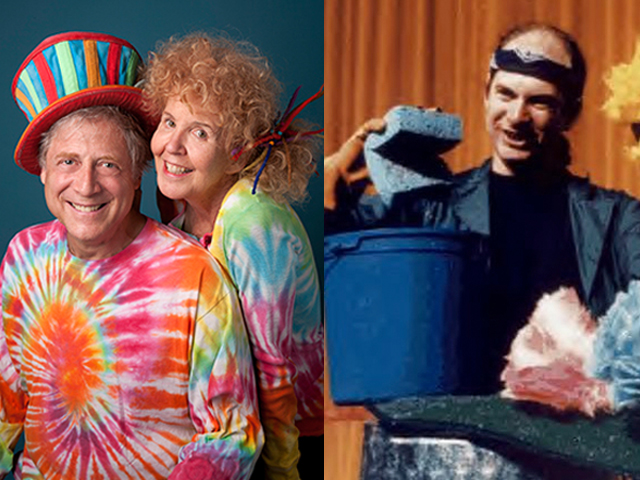 Puppeteers who perform outdoors should either receive  medals or have their heads examined; few venues are as challenging.

Puppeteers who perform outdoors should either receive  medals or have their heads examined; few venues are as challenging. The odds against a successful performance are stacked high. Heat, wind, rain, planes, jackhammers, iffy sound equipment and lurking ice cream trucks. (more about this one later)

In mid-July, Allynn Gooen and Annie Hickman, a husband and wife team from Chestnut Ridge, NY, performed “The Love Bug’s Hug” in Columbus Park in New York as part of the Arts in the Parks series presented by City Parks Foundation. Allynn and Annie are experienced pros when it comes to outdoor gigs. They come prepared– sandbags, water bottles, publicity handouts and a ton of costumes and balloons.

As the pigeons lined up on the roof tops to watch the show, tiny preschoolers were herded into place. Snappy pre-show music helped drown out the roar of the portable generator. And after a while the annoying sound became innocuous white noise. The wireless mic was acting up so Allynn quickly switched to his back up hand held mic. That meant he had to blow up a zillion balloons with one hand while juggling a mic with the other.

“The Love Bug’s Hug” serves as a vehicle to show off Annie’s giant woven costumes and Allynn’s awesome abilities of blowing up three balloons with one breath, handing a stage full of volunteers and providing a running patter to keep the story moving along. Sure, some of the balloons break, but as Allynn reassures us, “These are the best balloons money can buy, I get them from Ballooningdales!”

After the show, the tots swamped Allynn who continued to blow up small heart shaped balloons as souvenirs until he finally ran out of balloons or breath. Annie and Allynn seem to thrive on the spontaneity demanded of outdoor performing. They know how to relax and roll with the punches. And they know how to turn a bare patch of concrete into a magical stage.

In mid-August, Preston Foerder presented “Fairy Tales of the Brothers Grimy” in Washington Square Park. Flanked by streets and walkways, Preston was cornered into a brown grassy area under a few large trees. Park life was noisily happening all around him. But Preston persevered.

The show’s premise is clever. A custodian with all his cleaning paraphernalia ends up performing stories he’s reading on his snack break while waiting for the “real” performer to show up. The cleaning utensils are transformed into puppets and props for two of the Brothers Grimm’s tales, “The Magic Bottle” and “The Frog Prince”.

An eager photographer was on hand taking shots of Preston at work. And eager he was. At times he was on “stage” no more than two feet from Preston. I guess he’s never heard of telephoto lenses. Along with a distracting photographer, Preston had to contend with a Ben and Jerry’s truck parked directly behind him that had announced before the show there would be free ice cream immediately after the performance. You can guess where the audience’s attention went from there.

And yet Preston continued to persevere. His timing was never rushed. His concentration was unwavering. Here is a professional working under some of the worst conditions and still beating the odds.