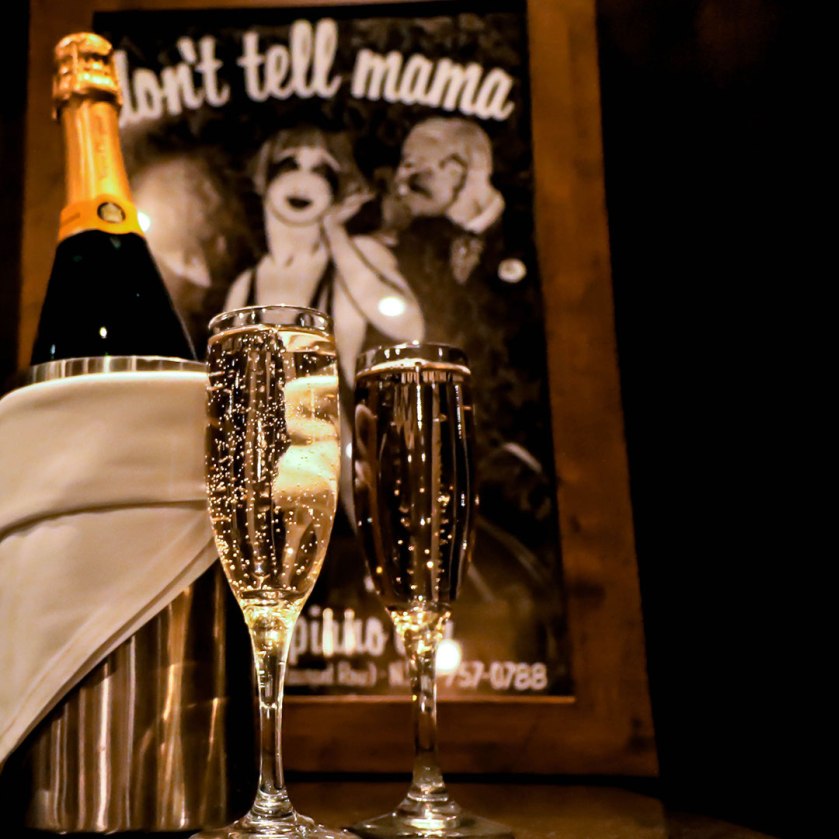 West 46th Street between 8th and 9th Avenues is known as Restaurant Row. Situated on the edge of the Theater District this block is lined with eateries offering quickly served pre-theater prix fixe to tourists who have to make an 8 p.m. curtain. Scattered among the restaurants are a smattering of bona fide cabarets, like Don’t Tell Mama. (Its name derives from a song from the musical, “Cabaret.”) To find the puppets at Don’t Tell Mama, you have to walk down several steps and make a quick turn to the right through a side door which opens into a sliver of a room paralleling the main cabaret area. In this dark intimate setting with a bar at one end, a stage at the other and postage stamp size tables in between, puppeteers feel free to cut loose.

Even though the roster of acts frequently change, the type of performances remains the same- short skits designed for an adult audience. On this early April evening five acts were featured.

Opening the program was one of my favorite performers, Jim Napolitano of Nappy’s Puppets. Napolitano is a versatile performer who works full time in both television (Between the Lions) and theater (Bunkbed Commandos). Since a lot of Napolitano’s work is geared for kids, he likes to spoof himself and his own kiddie shows by playing a character called “Uncle Nappy.” Using a portable shadow screen and flexible figures, Uncle Nappy presented a series of skits, including monkeys jumping on a bed and mice getting bopped on the head, that required the audience to sing and clap along as if we were toddlers. The real fun came when Uncle Nappy stepped out from behind the screen to chastise us for not participating or to make some comment that only adults could fully appreciate. By satirizing his own children’s shows Napolitano seemed to be letting off a little steam and showing off his facililty to ad lib.

Then Tim LaGasse and Ceili Clemens presented The Tragedy of the Tungston Trio. This table top act featured a three faced character at odds with himself (themselves?). Told through verse, the narrative poem ends with the inevitable split. Although you could see what was coming a mile away, the act was cleverly done.

Binki, created by Heather Asch, builder extraordinaire, and performed by Jen Barnhardt, Ceili Clemens, Mike Schupback and Bill Hubner was the most inspired piece of the evening. The “binki” refers to the cozy security blanket we all snuggle under when trying to escape from the cold cruel world. Binki is also a story of seduction. A man is shaken out of sleep by a rude alarm clock. The world beckons him to get up, get to work. At the same time, the binki, like a sexy siren, coaxes him to return to bed and curl up in her warm recesses. Played out in mime with a “Bolero” soundtrack, the love affair is milked for all it’s worth. Both the manipulation and acting were well timed and never over done. This skit proves what can be accomplished if you start with a strong concept and know how to follow through with it.

Next up was another shadow piece. Deb Hertzberg, who put together this evening’s cabaret, sang “Motherless Child” a capella while manipulating beautifully designed figures. Even though this was not a comic piece, it was well placed in the program to offset the more zany acts. Cabaret style theater is not all about being funny. There’s always room for thoughtful skits like this one.

The last act of the evening featured Scott Hitz performing Interactive TV. Hitz used a television set like a puppet by manipulating whatever appears on screen- a ventriloquist’s figure, a human with invisible strings and rudimentary hand shadows. At one point Hitz even turned the TV into a shooting gallery. He made a gun out of his hand, pointed it at the tin cans on the screen, said “bang, bang” and the cans toppled over. Although not an original concept, Hitz’s enthusiasm and precision timing made this skit work.

All five acts were introduced from a pre-recorded video played on a small tv set located near the bar. On screen were two characters created by turning the camera upside down and shooting a close-up of the mouths of two guys (Bill Hubner and Michael Schupbach). Upside down mouths are weird to look at. And these were even weirder because they had been augmented with plastic eyes and wigs stuck to the chins- truly bizarre.

Puppeteers need a venue like Cat’s Paw Cabaret. It’s a great place to flex creative muscles and experiment with crazy stuff. Unfortunately, at this particular performance the majority of the audience was made up of puppeteers. We all need to help promote this venue beyond our small insulated puppet world. This place can’t make it soley by preaching to the choir. Here’s hoping that Cat’s Paw Cabaret will draw in the uninitiated who will become so enthralled with the magic of puppetry that they’ll become regulars visitors on W. 46th Street.

Footnote: THE ORIGINS OF CAT’S PAW CABARET
Deb Hertzberg writes:
Most of the puppeteers who performed that night had first met at the O’Neill Puppetry Conference held every June in Watertown, CT. Every night during the conference they would gather in the local pub and perform parodies and skits for each other. When the conference ended they wanted to continue to create an alternative, entertaining and fun atmosphere for their brand of puppet theater. Cats Paw Cabaret was begun to support these artists. Look for more performances in the fall on the first Friday of every month.