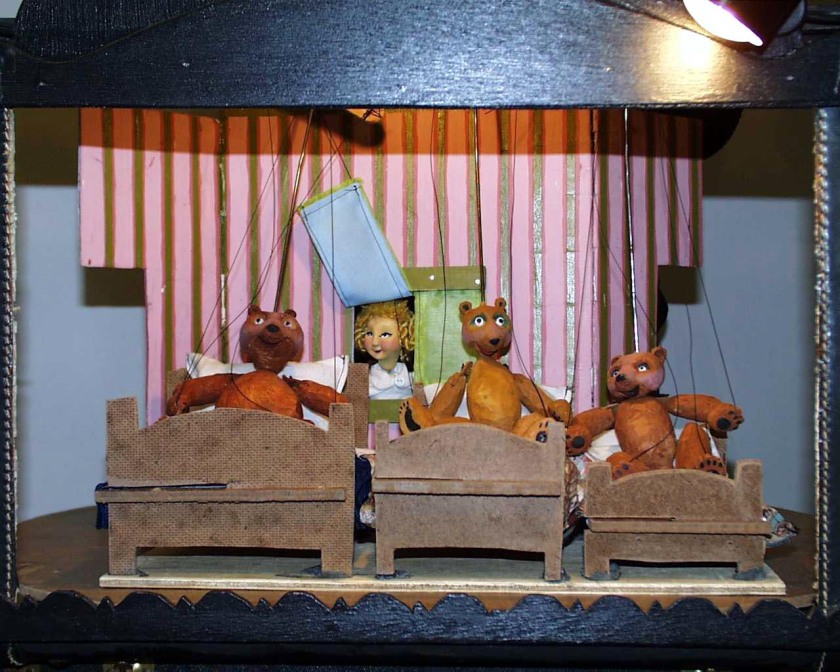 Two examples of full time professional puppeteers who also choose to freely give their energies and time to promoting the art of puppetry.

If you’re serious about puppets, you probably have joined one or more puppetry organizations, including The Puppeteers of America (PofA), Union Internationale de la Marionette (UNIMA) and your local guild. All three organizations survive and flourish thanks to a staff of volunteers, many of whom are full time puppeteers.

Steve Abrams, the newly elected President of The Puppeteers of America and Liz Joyce, a second term President of the Puppetry Guild of Greater New York (PGOGNY) are examples of full time professional puppeteers who also choose to freely give their energies and time to promoting the art of puppetry. When an office holder in one of these organizations performs for the public, he or she wears two hats– one, representing the puppet organization and the other, his or her own puppet company.

Steve Abrams’ Aesop’s Fables at the Lenny Suib Puppet Playhouse was the ideal show for this popular baby stroller venue. Before the story even began, Abrams stepped out from behind the puppet booth to chat. In fact, he spent the majority of the thirty five minutes gently educating the audience in the history of puppets and demonstrating their various types– shadow, hand, marionette and movable mouth. His relaxed conversational style and assortment of character voices appealed to both the children and their parents.

Abrams knew his audience’s appetite and served up exactly what they wanted– something warm, friendly, a little silly but nothing scary. Over the years this “bread and butter show” has been polished to perfection. Like a seasoned stand-up comedian, Abrams always remained in control, even when the children were shouting out their enthusiastic comments.

Three of Aesop’s fables– “Tortoise and the Hare,” “Lion and the Mouse,” “Fox and the Grapes”– were lumped together as one story with overlapping characters and plot. Then for dessert, Abrams treated the audience to a truncated version of “Punch and Judy” (violent free, of course). By keeping his show low key and elementary, Abrams’ seemed to be announcing, “See how simple this is! You can put on your own puppet show!”

At the Donnell Public Library in mid-town Manhattan, Liz Joyce also entertained a brigade of toddlers. Before the show began, Joyce asked for a show of hands to decide whether to turn off the fluorescent ceiling lights or to leave them on. The “offs” were in the majority. The room went dark except for Joyce’s household clip-on lamp that served as her stage lighting.

Joyce’s compact set up consisted of a toy theater proscenium and a revolving stage which smoothly revealed the story’s requisite settings– kitchen, forest, living room, bedroom. Joyce’s wooden Sicilian rod puppets were beautifully carved and costumed, giving the thirty minute show an Old World feel. Welcome touches to this all too predictable tale included original music and a clever song sung by the bears while waiting for their porridge to cool.

Joyce’s solution to one of the more difficult problems for a solo puppeteer– performing a show with more characters on stage at the same time than two hands can handle– was ingenious. Joyce’s script had Mama Bear so busy with offstage household chores (balancing the checkbook, for example), that she rarely needed to appear at all, at least not with the rest of the family. Mama Bear’s wry comments elicited chuckles from the grown-ups. And the children giggled at Goldilocks’ antics, especially when Baby Bear’s chair collapses, sending her sprawling on the floor.

At one point several children became so enthralled with the puppets that they stood up and brought their faces to within inches of the miniature theater. Joyce was forced to interrupt the story and coax them into sitting down, diplomatically asking assistance from their remiss parents. Even though this incident was minor, Joyce may want to reconsider the scale of her stage. It might be too small for all but the most intimate of venues.

Both Abrams and Joyce admirably demonstrate their devotion to puppetry through their performances and their willingness to serve as leaders of their respective organizations. The PofA and PGOGNY are fortunate to have them as their presidents and ambassadors of puppetry to the world.