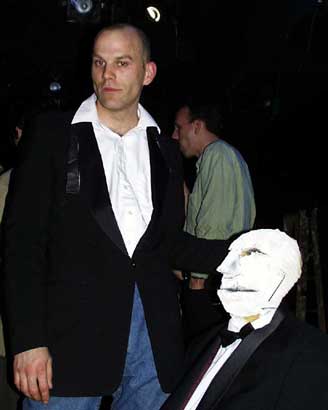 Advertised as a “special night of puppet love,” the evening proved to be more like a cheap, heart shaped box of chocolate candy that should have come with a warning label– “buyer beware.”

Basil Twist, the perennial host of the Puppet Parlor, was nowhere to be seen. Filling in as M.C. was the most venerable puppet of puppetdom, Mr. Punch. Since there were no children in attendance, this was Mr. Punch’s rare opportunity to cut loose with some old fashioned ribald humor. But in the hands of Liz Joyce, the 400-year-old red nose rascal surprised everyone by being on his best behavior– no slapstick bashing, no baby tossing, no wife murdering. Except for a brief dalliance with a “pretty as plaid Barbie” and a suggestive interlude involving Judy caressing his “sausages,” Mr. Punch behaved like a model husband. What is this world coming to? Maybe his uncharacteristic behavior can be blamed on the calendar.

Valentine’s Day is one of those faux holidays kept alive and profitable by greeting card companies and florists. When Mr. Punch falls victim to this day of sappy sentiment, you know there’s not much hope for the rest of us. And there wasn’t much hope for the audience at this fourth installment of Puppet Parlor which is best summed up by a line from one of the pieces, an excruciatingly lame sketch about performing open heart surgery on a cake– “I’m sorry if you’re disappointed by the outcome.”

It wasn’t just Mr. Punch’s squeaky clean behavior that was disappointing. Advertised as a “special night of puppet love,” the evening proved to be more like a cheap, heart shaped box of chocolate candy that should have come with a warning label– “buyer beware.” For one thing, there was no printed program. So it was difficult to tell one piece of confection from the other. For another thing, the theatre was grossly oversold. Thank goodness the Fire Marshall was probably out with his wife for a Valentine’s Day dinner. Otherwise the Dorothy B. Williams Theater might be facing a stiff fine for blocking aisles and exits with folding chairs. Though it was gratifying to see a SRO audience for a puppet show, it was uncomfortable to be treated like a piece of foil wrapped chocolate stacked into a tight little box.

All these inconveniences would have been swiftly forgotten if only the puppet sketches had been better. Every piece, with the exception of one, fell short of Puppet Parlor standards. Puppet Parlor is the brain child of Basil Twist who, after his Obie winning Symphonie Fantastique show closed last year, wanted to see this small basement theater kept alive with quality puppetry. Inaugurated in July 1999 as part of the American Living Room series, Puppet Parlor strives to present intriguing work– some finished and some in progress.

A work-in-progress is one thing, but when a puppeteer visibly reads from her script as Emma Johnson did in “Loon Story,” you begin to wonder if the piece may have been exhibited prematurely.

Michelle and Deborah Beshaw’s lengthy tale, “Like a Caterpillar,” about a woman leaving her chair to venture into the world, was difficult to follow and painful to listen to. A siren whistle should be used judiciously for special effects, not for the voice of a character.

Chris Maresca’s “I Seem to be Growing Calm” consisted of three distinct pieces intended to serve as a unified whole. Although each section was visually interesting, they seemed clumsily cobbled together.

Only Kevin Augustine’s work-in-progress, “Ten,” measured up to Puppet Parlor standards. Augustine (Lone Wolf Tribe) was one of the featured performers in last year’s Fringe Festival where his “Big Top Machine” showed off his considerable acting and puppeteering talents. “Ten” featured Augustine, looking a lot like John Malkovich, being interrogated by invisible authorities. Apparently there had been an attempt on his life by a puppet character he had created. Kevin used the Frankenstein myth to explore the ramifications of playing god, from the creator’s point of view. The piece was polished and beautifully executed and left the audience wanting more.

The Puppet Parlor at HERE is a wonderful showcase for this region’s diversity of puppetry talent. But unless each event is carefully curated with higher standards for performance, Puppet Parlor will end up being nothing more than a glorified potpourri.