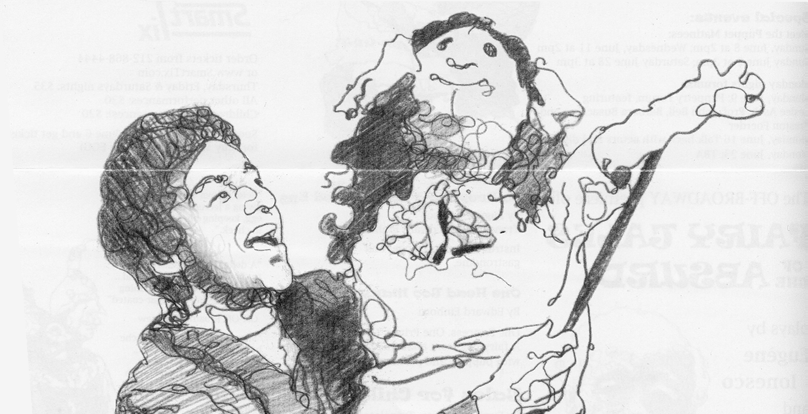 Ionesco’s brand of absurdity is sophisticated; to appreciate his twisted logic you have to be familiar with the convention that an absurdity is based on.

Untitled Theater Company #61 has got a thing for Eugene Ionesco, the French author of 39 plays. In 2001, UTC#61 presented all of his plays plus his films, seminars and readings in a whirlwind Ionesco Festival that spanned 13 different venues in three months. In fact, two of the three pieces in “Fairy Tales of the Absurd” were previously performed in the 2001 New York International Fringe Festival- “To Prepare a Hard Boiled Egg” and “Tales for Children.” I never thought of Ionesco (“The Bald Soprano,” “The Chairs,” “Rhinoceros”) as a writer of children’s fare. And after seeing “Fairy Tales of the Absurd” in this its Off-Broadway premiere, I still don’t consider him a writer of stories that children would enjoy.

Of course Ionesco’s trademark style has absurdity written all over it. But just because something is labeled “absurd” doesn’t necessarily make it fit for kids. Ionesco’s brand of absurdity is sophisticated; to appreciate his twisted logic you have to be familiar with the convention that an absurdity is based on. For example, the first piece, “To Prepare a Hard Boiled Egg,” which, by the way, is not a puppet piece at all but a monologue performed by an actor in a chef’s hat, requires some experience with following directions in a cookbook. This quasi lecture goes into infinite detail on the prosaic act of boiling an egg. Usually, a simple procedure, boiling an egg in Ionesco’s mind becomes as tough as programming a VCR.

Ionesco’s words poke fun at our tendency to over complicate everyday occurrences. He also skewers the writers of instruction manuals who assume that their readers are totally incompetent. It appears that the only detailed instruction that is left out of “To Prepare a Hard Boiled Egg” is when to take a breath. It’s a clever piece that’s performed by Peter Brown with expertly timed deadpan humor. But whether a child can fully enjoy its subtitles and satire is debatable.

Maybe children can better appreciate “Tales for Children.” At least it’s got puppets. And it’s got actors–John Blaylock, Uma Incrocci and Celia Montgomery– who do their best to make this quirky play come to life. Based on stories that Ionesco actually told to his young daughter, “Tales for Children” translated by Karen Ott is full of word play and bizarre imaginary worlds. The daughter puppet designed by Berit Johnson is life size and interacts with the actors. But the actor who manipulates the daughter, Josette, is dressed just like the puppet which means the actor and puppet are constantly competing for our attention. Where are we supposed to look- at the puppet, the actor, both?

Liberal use is also made of an onstage narrator, a technique which tends to pull energy away from the key players. Narrative devices like “He said, She said” may work on the page, but in the theater seem unnecessary and oddly clumsy. A good adaptation should eliminate these bookish aspects and allow the actors to just speak the lines. A faithful adaptation doesn’t have to use every word from the original work to be considered “faithful.”

There’s a dark subtext to this story which might be difficult for children to understand. The mother and father characters in “Tales for Children” seem to be either recovering from a hangover or are on the verge of a separation or both throughout most of the play. Told from Josette’s point of view, we get occasional glimpses of their marital problems: Father sleeps extra late, Mother is off shopping, again. But it’s the father’s unusual sense of child rearing that eventually takes center stage. The dad loves to play with Josette by playing with language. For example he names everyone “Jacqueline” or gives familiar words alternate meanings. Ionesco’s real daughter, Marie-France, must have had fun growing up with a dad with such a playful mind.

Edward Einhorn, the director and the author of the third and final piece that makes up “Fairy Tales of the Absurd,” is obviously a diehard Ionesco fan. At the age of seven he was read Ionesco tales by his older brother. The stories got into his blood and have stuck with him ever since. According to Einhorn, a child instinctively knows what Ionesco had to teach us–that words and their meanings are a giant, unknowable mystery. And oddly enough Mr. Einhorn’s own play, “One Head Too Many,” may have beat Ionesco at his own game.

Although not written to be performed alongside the Ionesco work, “One Head Too Many” is a perfect companion piece since it too plays footloose with language and logic. Set on another planet, this fairy tale tells the story of a Princess who marries her second head. (Now that qualifies as absurd.) In her adventure the Princess also encounters a witch who specializes in transforming royal personages, with varying degrees of success.

It’s all great fun. The colorful costumes (Carla Grant) and imaginative make-up are reminiscent of a classic Saturday Night Live! skit featuring the Coneheads. And like any good comedy sketch, “One Head Too Many” works on several levels. The silliness obviously appeals to the very young while at the same time the witty dialog among the bickering parents can be appreciated by adults. Mr. Einhorn’s particular brand of humor makes this story ideal family fare.

A final note about Mr. Einhorn: Edward is the Artistic Director and founder of the ten year old UTC #61. He’s also directs the three plays in “Fairy Tales of the Absurd” and has worked on plays all over New York. In addition to these duties, he has found time to author several children’s books, including “Paradox in Oz” and a sequel, “The Living House of Oz.” Children’s theater and literature are all the richer thanks to Mr. Einhorn’s wealth of talents.